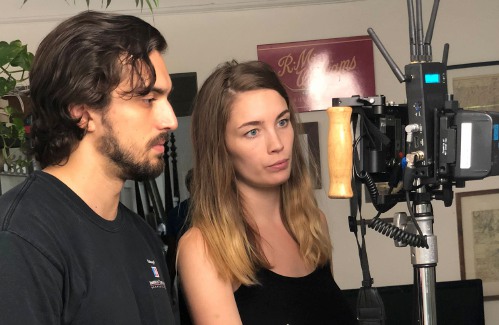 Valley News – Art Notes: Filming a short film will be a homecoming for the Thetford native

There is a modest and charming irony in Molly Longwell’s plan to shoot a film in her hometown.

Living in Brooklyn during the coronavirus pandemic, Thetford native Longwell found herself thinking about isolation and how a life-altering event can make a person come to terms with it.

And it got her thinking about how she felt growing up in a small town and how she wanted to get out of it, free from feeling like everyone knew her.

After the lockdown ended in New York, Longwell wrote a script for a short film set in Thetford. bad mother follows a woman who learns her spouse has been unfaithful and feels the rage and grief of someone whose world has been turned upside down.

But to get that sense of isolation on film, Longwell must come home and reach out to the community she had both wanted to escape.

bad mother is by no means autobiographical (and it should not be confused with Ayelet Waldman’s 2009 book of the same name), but it is “a story that is so intertwined with my experiences growing up in the Upper Valley that I wanted people to know about that,” Longwell said in a phone interview.

She contacted me for the project. This space is generally concerned with art that is available to the wider Upper Valley audience. Longwell, who will turn 29 before filming begins in May, is on the other end of the process, but before the film hits local screens, whether in cinemas or living rooms, local audiences have a role to play.

Vermont and New Hampshire have no shortage of writers, poets and visual artists. But aside from a handful of success stories, there are fewer and fewer filmmakers. Florentine Films, in Walpole, NH, of which Ken Burns is the most notable name, is the outlier as a nationwide company despite being in the sticks, and Norwich’s Nora Jacobson has made a career in local cinema. . Jay Craven, John O’Brien and others have made films that tell stories of northern New England.

Although there is a community of filmmakers, there is not a great infrastructure. But it’s growing.

Samantha Davidson Green, who earned a master’s degree in film at UCLA, has been where Longwell is now. When she returned to Plainfield in 2013 with her husband and their three boys, she didn’t know how she could continue making films.

But she found a community of support that ranged from actors from Parish Players to other filmmakers such as Jacobson.

“I just think we have a very high density in the Upper Valley of people with those connections,” she said. Even so, as an independent filmmaker, “you have to be really scrappy and resourceful.”

With the help of this community and some classmates from UCLA, she was able to freeRoad Thrasherhis first feature film, in 2019.

This production, and that of Longwell, highlights a central fact of cinema: it is a collaborative art. A filmmaker should involve other people in the project from the start, then keep adding them until the camera starts rolling. Longwell and Davidson Green enjoy this aspect of their work.

“I love working with people and I love being with people and that’s just the most exciting thing in the world,” Longwell said. She likes to immerse herself in a story, but also in the moments of discovery that the actors and other actors in the production bring her.

Hiring all these people requires funding. So far, Longwell has cast two of the five actors and hired a producer — his partner, Nabil Elbehri — and a cinematographer, Jackson Eagan. The number will increase until May, then Longwell will have to transport and house them all. She has raised $8,000 of the film’s $20,000 budget and is planning a crowdfunding campaign.

Whether online fundraising is a sustainable way to fund the arts is a matter of debate. Women who get into filmmaking have a harder time raising money, Davidson Green said. This is true throughout the industry.

To do Road Thrasher, Davidson Green went to 25 backers to raise money to shoot and then finish the film. Crowdsourcing can fund a project, “but it’s not a career,” she said.

Longwell also reached out to Davidson Green, who ran White River Indie Films and is now executive director of CATV, the community television station based in White River Junction. In both organizations, Davidson Green has worked to build the region’s capacity to support filmmakers. Longwell can see it.

“I wanted to immerse myself more in the Upper Valley film community because it’s thriving,” she said.

His primary filming location will be his childhood home in East Thetford. His parents, Jan Henshaw, interior designer, and Don Longwell, architect, supported him.

But other needs will arise. Places to stay, cars and props to borrow, food for cast and crew. All of that helps get a little movie off the ground.

The world of filmed entertainment is alarmingly large, but our corner, films about Vermont, New Hampshire, and the Upper Valley subset of the Twin States, are not. Davidson Green compared supporting local films to buying local craft beers or small-batch yogurts.

“What people are able to create locally is art,” Davidson Green said, and it’s just as compelling as what comes out of Los Angeles and New York.

Where will the stories that reflect life in the Upper Valley come from, if not from us?

Longwell plans to have a website at mollyvlongwell.com and launch a crowdfunding campaign by the end of the week. She can be contacted at [email protected]

By browsing Photo Booth, the excellent photographic chronicle that the new yorker publishes on his site, I came across an artist who was unknown to me.

Judith Joy Ross has been quietly painting portraits of ordinary Americans since the 1980s. “Over the years,” Vince Aletti wrote for Photo Booth, “her presence wavered rather than steady, and it was easy to lose sight of her. “

Aletti was writing about a catalog of his work that accompanies an exhibition currently showing in Madrid and traveling elsewhere in Europe, “with, infuriatingly, no dates in the United States yet,” he added parenthetically.

Reading this, I wondered if the Hood Museum of Art might not be the ideal place for this exhibition. John Stomberg, the museum’s director, specializes in 20th-century American art and culture and recently curated an excellent exhibition of photographic portraits. The newly expanded Hood is a busy venue and plans exhibits well in advance, but this show sounds like a trap.

This drama happened over email, so I’ll be brief. The Howe Library told Bruce Posner, who for years held its eclectic, free Monday night film screenings in the library’s Mayer Room, to find a new time for showings. Posner feels aggrieved, harsh words have been exchanged, but he doesn’t seem to have much recourse. If he wants his 25-year movie streak to continue, it seems likely he’ll have to pick another day and another time if he wants to keep them at the Howe.

Feature film producers present their projects in virtual sessions on February 11, powered by Largo AI software at the EFM Berlinale 2022