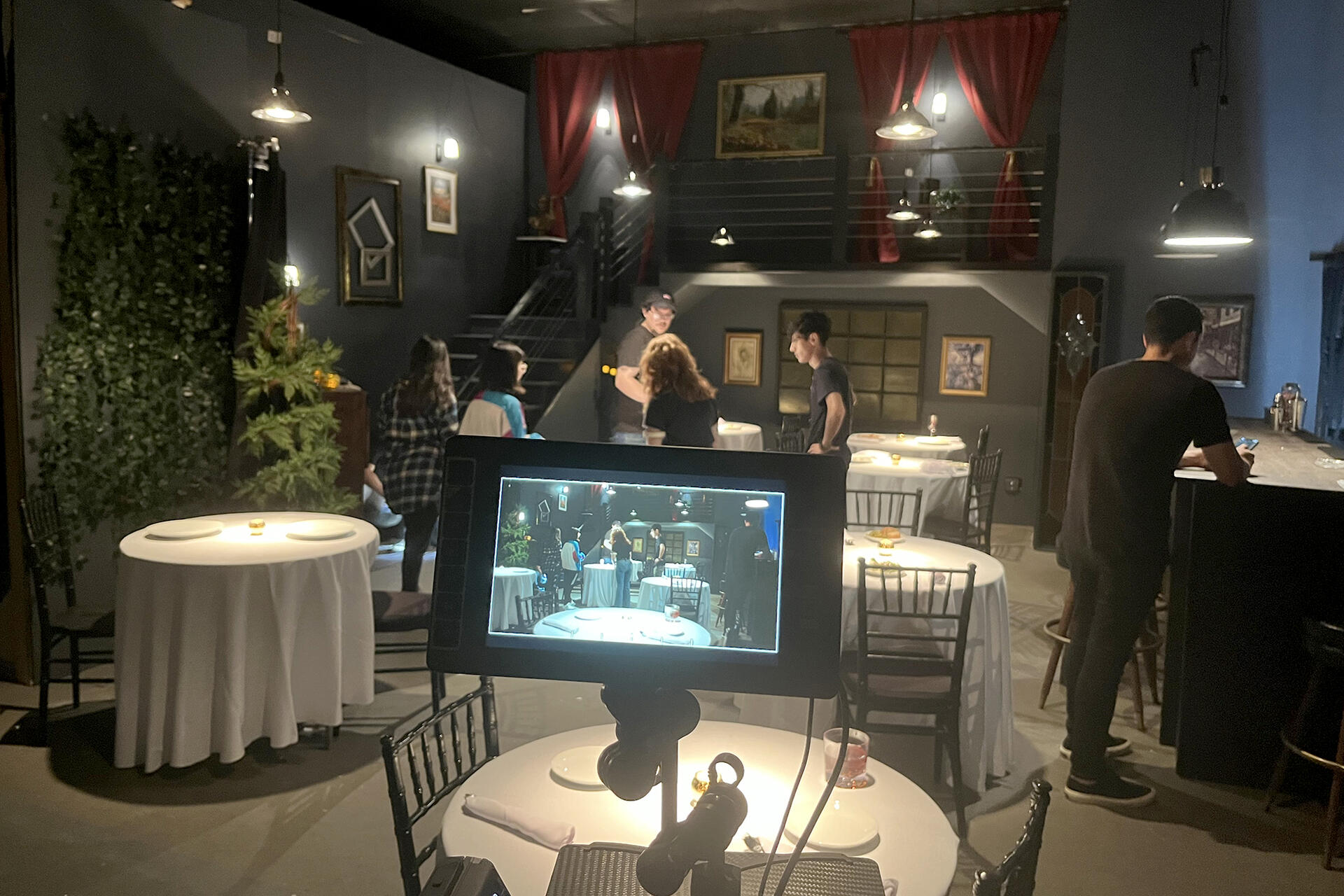 Breaking into the film industry is a tough business without proper credits to list in IMDB. Classes at UNLV guarantee students the experience while making an independent film written and directed by award-winning filmmakers.

This fall, a cast and crew of students, faculty, and professionals are filming Riot in Bloom on campus and around town. Created by three award-winning filmmakers/educators from the UNLV Film Department: director Brett Levner, screenwriter and casting director Roudi Boroumand and producer May May Luong (producer).

With their students, they will film and edit Riot in bloom this semester then dive into post-production in the spring. The ultimate goal is to screen the film at film festivals and secure digital distribution.

Find out more about the immersive course

This is a film production course where students will work on a feature film during the fall semester alongside professors and film professionals.

Why is it taught?

To teach students the process of fundraising and producing their own low-budget independent films outside of the study system. Students will be able to carry out their own projects using minimal budgets.

“Gone are the days when you had to raise hundreds of thousands of dollars to make a movie,” says Levner. “Now with the advent of digital cinema and the rise of streaming and the internet, there is a demand for content. We want to inspire our students to take the bull by the horns and stop waiting and do their movies. This course will show them how it’s possible.”

Levner is an associate professor of film at UNLV. Levner received his BFA with honors in film and television production from New York University and his MFA with honors in directing from Columbia University. She was the first woman to win the Coca-Cola Refreshing Filmmaker Award for her short film, be reel and was honored at the 2005 Independent Commercial Producers Association Show for “Excellence in Motion Picture Making”. It is currently part of the permanent collection of the Museum of Modern Art.

Levner has numerous credits as a writer, director, and producer, including directing the feature film, Track, on the sex trafficking of minors in Las Vegas. Under his tutelage, his students have won numerous awards, including the Pacific Southwest Student Emmy Awards, an Addy Award, a Best Nevada Filmmaker Award, and a Spirit of Activism Award.

Alumna Luong earned a bachelor’s degree in film with a minor in theater and a master’s degree in writing for drama media from UNLV.

Luong has produced six feature films including Track, directed by Brett Levner, with Missy Yager (Mad Men, Manchester by the Sea) and Sam Trammell (True Blood, The Fault in Our Stars). His films have won awards at film festivals around the world, received limited theatrical releases, and been distributed on cable. In 2017, she was named Nevada Director of the Year.

She teaches film production courses at UNLV and works on the development of several feature film and television projects.

How does the class work?

Students will participate in the production and filming of the film. They will be divided into departments based on their areas of interest and past experiences, including directing, producing, cinematography, shooting and electrical, art direction, costuming, sound and film supervision. script. Each department will be headed by a film faculty member or working professional. These department heads will train and mentor students in their field.

What will students be surprised to learn?

“The amount of planning and collaboration it takes to make a feature film,” says Luong. “Making feature films takes long hours and hard work, but it can be rewarding to see the end result on the big screen and know you helped make it a reality.

“Also, the real-world experience that comes with making this film is how to collaborate with others,” adds Levner. “Filmmaking is collaborative in nature, so you have to learn how to work well with others. It’s a skill set that can be applied to many disciplines.”

What are the instructors most excited about in this course?

“For students who wish to pursue narrative film production after graduation,” says Levner, “they will be required to work on productions and receive screen credit for their work on film. This class will provide the necessary experience to bring them onto their next project and for many of them this will be their first screen credits on a feature film!”

Where do the students go next?

“We will be offering a follow-up course called Independent Feature Film Editing in the spring,” Luong said. “It will be co-taught by Brett Levner and Jason Edmiston. Students interested in editing can take this course and participate in the editing of the film together.”

What is the playlist?

Alevai, a Yiddish short, will premiere at the Manchester Jewish Museum in November