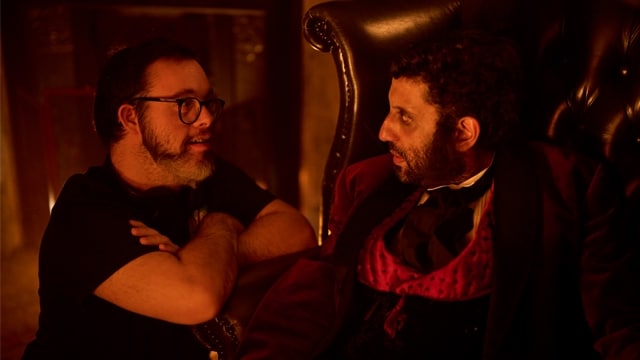 Sky announces production is complete The puppet asylum, a cinematic horror short from writer and director Otto Baxter, and that production is underway on a feature-length documentary Otto Baxter: not a ***ing horror story which explores Otto’s extraordinary life – past, present and his vision for the future. The accompanying pieces are the first original commissions of this scale, written and directed by someone with Down syndrome, to be commissioned by a major UK broadcaster.

The Puppet Asylum, a 30-minute short set in Victorian London, is an allegorical horror biopic written and directed by Otto Baxter as a reimagining of his own life, from birth to becoming his own master. The unpredictable story, straight from Otto’s anarchic mind, traces Otto’s birth as a horned baby in a blood-splattered morgue, through his wayward teenage years, to his years of captivity in the ” Puppet Asylum”. Blending horror, dark comedy, an evocative soundtrack and a crude ventriloquist dummy, The Puppet Asylum is the macabre story of a misunderstood child who seeks control over his own life. The film stars include Paul Kaye, Rebecca Callard, Myanna Buring, with Dexter Fletcher and Adeel Akhtar, and music by Ed Harcourt.

Otto Baxter: not a ***ing horror story
is a feature-length documentary that follows 35-year-old Otto through a year of change as he makes his film. This was prompted by a moment of realization for Otto. He recently experienced bereavement and family health concerns that forced him to think about mortality for the first time – his own and his loved ones. Otto has always looked to movies to make sense of the world and this moment is no exception. Through the process of writing and directing, Otto finds the vocabulary to process his past and imagine his uncertain future. He tackles his demons head-on, but always with a fiery sense of humor. Otto’s extraordinary upbringing has meant that his life has always taken place in front of the camera to some degree. This rich archive will be blended with dramatic and current footage in this intimate documentary, to tell the compelling story of Otto and his family, placing it firmly in the context of changing UK attitudes towards disability. During his life.

The joint Sky Original project was commissioned for Sky Documentaries by Poppy Dixon, director of documentary and factual and Hayley Reynolds, editor. The Puppet Asylum is written and directed by Otto Baxter and produced by Peter Beard, Bruce Fletcher and Daisy Allsop. Sally Phillips is executive producer. Otto Baxter: Not a Fucking Horror Story is directed by BAFTA winners Bruce Fletcher and Peter Beard and produced by Daisy Allsop. David Nath is the executive producer. Produced by Story Films, supported by All3Media, in association with Archface Films and developed with the support of the BFI which allocates funding to the National Lottery, The Puppet Asylum and Otto Baxter: not a ***ing horror story will air on Sky Documentaries and the NOW streaming service in 2023, following a cinema window.

Screenwriter and theater director, Otto Baxter said: “I am the first screenwriter and director with Down syndrome commissioned by a UK broadcaster to make a film like this, but I hope it will not be the last. Bringing my vision to life has been totally breathtaking. the team made me feel welcomed, listened to, included and respected as a fellow artist. Having Down syndrome meant that I was often left out of teams, so it was wonderful to have the experience of to be at the center of such an inclusive and professional project. I hope this becomes standard working practice and contributes to the fight for inclusion and equality in the industry and beyond. I would like to thank all people at Sky for believing in me and allowing me to share my story.’

Poppy Dixon, director of documentaries and documentaries at Sky, said: ‘We are incredibly thrilled to welcome such a powerful and innovative double project to Sky Documentaries. It is a privilege to share Otto’s deeply personal story of growing up with Down syndrome in the UK, and his journey to recovery and redefining his life, on his own brilliant terms. Both are utterly unique projects, told with an unwavering creative voice; The Puppet Asylum and Otto Baxter: A Horror Story (w/t) will be at home among a multitude of compelling and daring factual content on the channel.

Documentary makers Peter Beard and Bruce Fletcher of Story Films said:“We’ve been friends with Otto for 15 years and thought we knew him very well, but joining him on his cinematic journey has given us incredible insight into how he sees the world. Otto is a true creator and director with vision. singular. . Sometimes during the writing process he would suggest ideas that we thought would never work. They usually turned out to be the most defining moments of the film. It’s a story and a world that could only come from the mind of Otto Baxter, and through this process, Otto found the vocabulary to unpack how he really feels about his past and his future.

Sky is Europe’s leading media and entertainment company and is proud to be part of Comcast Corporation, a global media and technology company that connects people in the moments that matter. Across six countries, Sky connects 23 million customers to the best entertainment, sports, news, arts and our own award-winning original content.

Sky Documentaries is the home of exclusive factual content for all Sky and NOW TV customers at no extra cost. The channel features world-class factual programming, delivering an unmissable mix of premium original commissions and acquired content that uncovers the story behind the story.

Following the launch of Sky Glass, Sky now offers its customers its most comprehensive range of products and services ever. As well as new streaming TV with Sky inside and everything built in, customers can enjoy award-winning Sky Q with all your favorite channels and apps in one place, and with Sky Go you can now access to an even better experience on your devices. Sky TV has new channels, new shows and new deals with Peacock, Paramount+ and more. Sky Mobile has been voted Best Pay Monthly and Best Value Pay Monthly network by Uswitch, and with Sky Broadband we offer our fastest speeds yet.

Building on the success of Sky Originals like Chernobyl, Gangs of London and Brassic, we are doubling our investment in original content by 2024 through Sky Studios. Our new TV and film studio, Sky Studios Elstree, is expected to create over 2,000 new jobs and generate an additional £3 billion of UK production investment in the first five years alone. Sky News provides unbiased and trustworthy journalism for free, Sky Arts is the UK’s only free arts channel making the arts accessible to all and Sky Sports, our leading sports broadcasting service, brings customers some of the greatest and the world’s best sporting events. events from the Premier League to Formula 1 and everything in between. Sky Cinema is the home of Sky Original films with new films launching every month alongside an unrivaled range of the latest cinema releases and an on-demand library.

We believe we can be a force for good in the communities in which we operate. We are committed to being Europe’s first zero-carbon entertainment company by 2030 and are proud to be a Feature Partner and Media Partner of COP26 – the UN Climate Change Conference. We are proud of our approach to diversity and inclusion: we have been recognized by The Times and Stonewall for our commitment to diversity, and we have set ambitious goals for 2025 to continue to increase diversity and the representation. We are also committed to investing £30 million in our markets over the next three years to improve our approach to diversity and inclusion and tackle racial injustice.

NOW is the home of brilliant entertainment. We’re one of the UK’s leading streaming services with critically acclaimed shows, new and exclusive movies, can’t-miss sports and epic kids’ shows, all contract-free. Sign up with an Entertainment, Cinema, Sports or hayu subscription to instantly stream to TV, mobile, desktop and over 60 other devices. Watch on the go and even offline with our app by downloading shows and movies.

Entertainment members can enjoy critically acclaimed dramas, documentaries and comedies, Emmy-winning shows, the best of HBO and exclusive Sky Originals. Cinema members can discover over 1000 brilliant films, from the latest blockbusters and classic favorites and a new premiere every day. Sports members cheer on the unmissable Premier League, international cricket, F1, golf and more – all live, on 11 Sky Sports channels.

Plus, members can enhance their experience with NOW Boost – that’s Full HD 1080p, Dolby Digital 5.1 Surround Sound, and streaming on up to 3 devices at once, ad-free on VOD.

For super-fast broadband, members can enjoy a contract-free connection with a NOW Brilliant

Go behind the scenes: Instagram.com/NOWTV

Story Films, backed by All3Media, is an award-winning television production company specializing in high-end scripted dramas and high-end documentaries, founded in 2016 by BAFTA-winning filmmakers David Nath and Peter Beard. Story has a diverse team of creative and production talent who bring the most powerful and entertaining stories to screen with passion and integrity.

Rising star Heidi Schooler shines in ghostly feature ‘Half Dead Fred,’ which will screen in Flint, Michigan in August