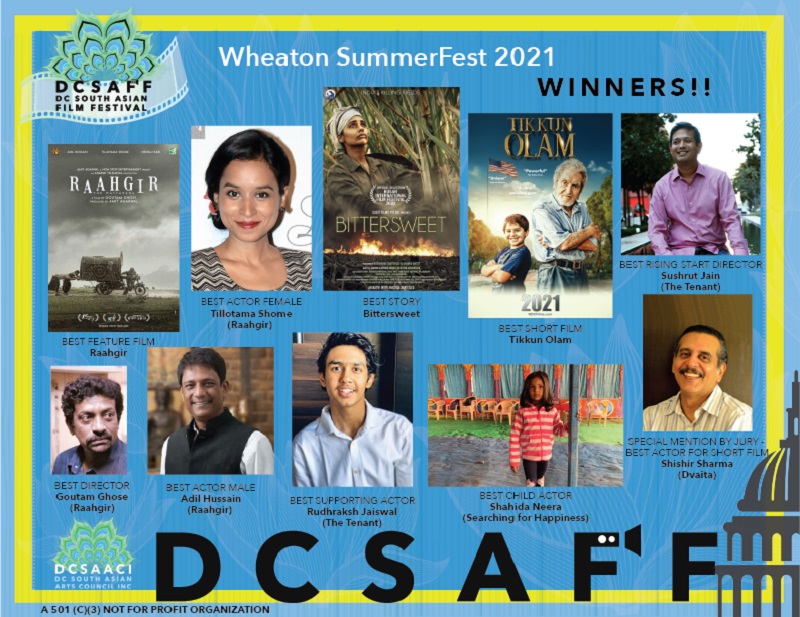 The theme of DCSAFF focuses on unity and achieving joy amid the hatred, division, terrorism and fanaticism affecting America

Goutam Ghose directed ‘Raahgir’ (Wayfarer), a film about poverty and hardship, two people help a fellow countryman save the life of an elderly couple won the award for best feature film at DCSAFF Wheaton Summerfest 2021.

The film also won three other grand prizes, including that of the best director at the Summerfest organized on August 28 and 29 by the DCSAFF (Washington DC South Asian Film Festival), presenting films from South Asian countries as well as the diaspora. South Asian world.

Other award-winning films also reflected the theme of the DCSAFF Wheaton Summerfest messages of unity and achievement of joy, according to a press release.

â€œTikkun Olamâ€ (kindness) is a reminder to â€œnever forget our veterans and be kind to the homeless and our fellow citizensâ€.

â€œThe tenantâ€ speaks of â€œacceptanceâ€ and letting people live their own lives, don’t be â€œjudgmentalâ€, seek to understand first.

The pursuit of happiness asks, “Are we not all looking for happiness?” And suggests “It’s mostly in us and around us, cherishing times and time with those we love.”

â€œDvaitaâ€ (Being considerate) suggests that â€œwe will all have to deal with aging issues one day, so have compassion now. Dementia is common and we need to be kind, patient, accept it, and take care of our loved ones.

â€œBittersweetâ€ highlights a significant health problem among Maharashtra sugar cane workers that needs to be addressed.

â€œGiven the current atmosphere of hatred, division, terrorism and conservative fanaticism affecting America, the DCSAFF theme encourages people to focus on the big picture, which is unity and the achievement of joy, â€the statement said.

“We encourage our audience and our community at large to get involved in various social causes through artistic campaigns to save the environment, be kind to each other, accept different beliefs, be happy, participate in the arts , all because life is short, â€he said. .

To encourage the participation of emerging filmmakers, the following awards were presented:

DCSAFF said it provides an open platform to bring important conversations about social issues to the fore, reduce discrimination and engage in social change.

He has screened films on women’s issues, LGBTQ acceptance, political corruption, religious extremism, the atrocity of the caste system, exploitation of labor laws, human trafficking and many more. other important social issues affecting South Asians around the world.