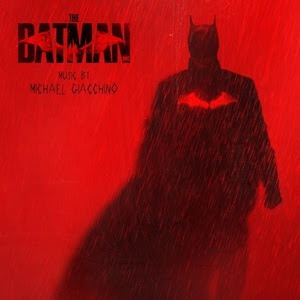 (February 25, 2022 – Los Angeles, CA) – Watertower Music is thrilled to announce the release today of the soundtrack to director Matt Reeves’ highly anticipated “The Batman,” which stars Robert Pattinson as the dual role of the Gotham City vigilante detective and his alter ego, reclusive billionaire Bruce Wayne. The film is set to hit theaters in North America on March 4, 2022 and internationally from March 2, 2022.
The Batman (Original Motion Picture Soundtrack) features the music of Oscar, Emmy and Grammy Award-winning composer Michael Giacchino, whose credits showcase some of the most popular and acclaimed film projects recent history, including “The Incredibles”, “Coco”, “Jojo Rabbit”, “Ratatouille”, “Star Trek”, “Jurassic World”, “Rogue One: A Star Wars Story”, “Spider-Man: Homecoming” and “War for the Planet of the Apes”. This is the fifth film that Reeves and Giacchino have collaborated on.

The release of the soundtrack comes just days before the film’s release and follows WaterTower Music’s campaign over the past few weeks digitally releasing three of Giacchino’s powerful musical character themes, each of which has captivated fans of the whole world. The first music to be heard from The Batman (Original Motion Picture Soundtrack) was, in order of release: “The Batman”, “The Riddler”, and “Catwoman”.

“I love working with Michael Giacchino, he’s one of my favorite people.” Explained the director of “The Batman”, Matt Reeves. “So when I got ‘The Batman,’ I went to see him knowing he had the same kind of love and connection to Batman as I did. He told me he wanted to do what we had never been able to do – record before I even shot a frame. He said: ‘I want us to record a sequel, as if it was Beethoven’s Unknown Sonata from Batman that had been found, and we let’s use it to score the whole movie.” I was excited about that, so he started writing while I was still writing, and he was sending me little sample recordings of songs he was doing on the piano .

Reeves said that later, “the night before Robert (Pattinson) had a screen test, Michael sent me this amazing sequel which had the Batman theme – he had it set up with an orchestra – and I was blown away! It was so emotional. I drove to the set, and (Batman producer) Dylan Clark was there, and I said, ‘You have to get in the car.’ He sat in the passenger seat and I turned up the music and we both literally cried, he thought it was amazing too.

“I just felt like it was a very special and fateful day, because Robert was about to be in one of the classic Batsuits, we were going to shoot some scenes, and there we were listening to this perfect music “, continued Reeves. “Suddenly you felt like you were about to be a part of movie history that meant so much to you and meant so much to everyone. That music helped Robert Pattinson become Batman, and we were listening to that music all the weather.

Over a year of stalking the streets as Batman (Robert Pattinson), striking fear into the hearts of criminals, has led Bruce Wayne deep into the shadows of Gotham City. With only a few trusted allies – Alfred (Andy Serkis), Lt. James Gordon (Jeffrey Wright) – among the city’s corrupt network of officials and high-profile figures, the lone vigilante has established himself as the sole embodiment of revenge among his fellow citizens. citizens.

When a killer targets Gotham’s elite with a series of sadistic schemes, a trail of cryptic clues sends the world’s greatest detective on an investigation into the underworld, where he encounters characters such as Selina Kyle (Zoë Kravitz ), Oz, aka The Penguin (Colin Farrell), Carmine Falcone (John Turturro) and Edward Nashton/aka The Riddler (Paul Dano). As the evidence begins to close in on them and the extent of the perpetrator’s plans become clear, Batman must forge new relationships, unmask the culprit, and bring justice to the abuse of power and corruption that is rampant. long time in Gotham City.

Alongside Robert Pattinson (“Tenet,” “The Lighthouse”) as Gotham’s notorious and infamous cast of characters are Zoë Kravitz (“Big Little Lies,” “Fantastic Beasts: The Crimes of Grindelwald”); Paul Dano (“Love and Mercy”, “12 Years a Slave”); Jeffrey Wright (“No Time to Die”, “Westworld”); John Turturro (the films “Transformers”, “The Plot Against America”); Peter Sarsgaard (“The Magnificent Seven”, “Interrogation”) as Gotham DA Gil Colson; Jayme Lawson (“Farewell Amor”) as mayoral candidate Bella Reál; with Andy Serkis (the films “Planet of the Apes”, “Black Panther”); and Colin Farrell (“The Gentlemen”, “Fantastic Beasts and Where to Find Them”).

Reeves (“Planet of the Apes” franchise) Directed from a screenplay by Reeves & Peter Craig, based on DC characters. Batman was created by Bob Kane with Bill Finger. Dylan Clark (“Planet of the Apes” films) and Reeves produced the film, with Michael E. Uslan, Walter Hamada, Chantal Nong Vo and Simon Emanuel serving as executive producers.

Warner Bros. Pictures presents a 6th & Idaho/Dylan Clark Productions production, a Matt Reeves film, “The Batman.” The film is set to hit theaters in North America on March 4, 2022 and internationally from March 2, 2022; it will be distributed worldwide by Warner Bros. Pictures.

“The Batman” is rated PG-13 by the MPA for violent and disturbing content, drug content, coarse language and some suggestive material.

ABOUT WATER TOWER MUSIC
WaterTower Music, the WarnerMedia companies’ in-house label, releases recorded music as rich and diverse as the companies themselves. Since 2001, it has been the soundtrack to many of the world’s most iconic movies, TV shows and games.

AFi’s founder and editor, Daniel “Julius Marx” Pickett, has been around toys his entire life. The first line he ever collected was Mego’s World’s Greatest Superhero line in the 70s. He’s been surrounded by collectibles ever since. In 1999 he was baffled by a lack of information and news about some of his favorite lines of toys he collected. Since he couldn’t find the information, he decided to search for it himself, thinking that other people might also be interested in the same news. He started writing a weekly column on the toy industry and an action figure for a toy news site and within a year he tripled the site’s daily traffic with his updates, reviews and features. of products. He has established relationships with all the major toy manufacturers and many sculptors, painters and mold makers. He has turned his hobby into a global expertise that the industry has embraced. In 2004 he teamed up with his toy buddy Jason “ToyOtter” Geyer and they started their own website www.ActionFigureInsider.com. Daniel has been quoted both in the industry and in the mass media. Over the years, Daniel and AFi have been sought after as experts in the field. Daniel has been featured regularly on “Attack of the Show” on the G4 Network as a top contributor to their “Mint On Card” segment, and our homepage has been linked to USA’s “Pop Candy” blog twice. Today. Daniel’s content has also been featured on Bloomberg News, MSNBC.com, Time.com, The Wall Street Journal, The Saturday Evening Post, CNN.com, AssociatedPress.com Wired.com, Fark.com, Boing-Boing, Gizmodo .com, Ain’t It Cool News, the official Star Wars blog, Geekologie, G4, CNet, and Toy Fare magazine, among many others. He has consulted on toy lines, books, documentaries and TV shows. But it all sounds really cocky and ‘tootin’ his own horn’ – basically it’s that Daniel loves toys and LOVES talking about them.