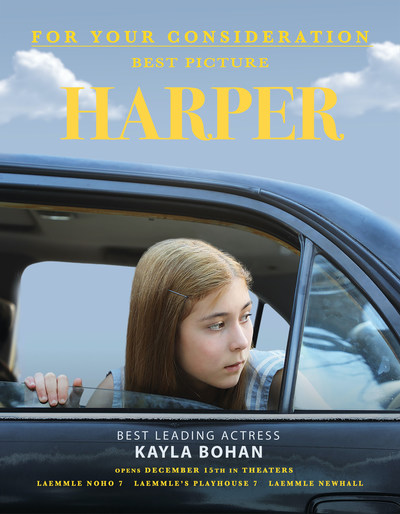 New feature ‘Harper’ is heading to select theaters for the Oscars qualifying race from December 15-22, 2021

HARPER, the feature film starring 11-year-old newcomer Kayla Bohan, will have its Oscar qualifying run® during the week of December 15 and December 22, 2021. The film, written, directed and produced by Kate Bohan, will be eligible in all relevant categories, including Best Picture, Director, Acting and Cinematography.

HARPER is the story of an 11-year-old girl who suddenly loses her single father and is then forced to live with an alcoholic aunt on a run-down family farm. Once Harper helps her aunt recover, she lives in harmony with the farm and its way of life, discovering a sense of calm and security. This new life is turned upside down, however, when her wealthy mother Southern Belle, who abandoned her at birth, reappears to claim her daughter for purely selfish reasons. Once Harper’s aunt discovers the miserable conditions Harper was subjected to, she springs into action as her love leads the way. Harper reunites with her aunt as they return to the farm where she once again finds her own happy place.

Director Kate Bohan says: “I think this film will inspire people. It’s about inner strength, resilience, and finding happiness on a path you never expected. I’m so grateful to have had the chance to work again with my daughter, Kayla, to bring this story to the screen. We look forward to wide release by Spring 2022.”