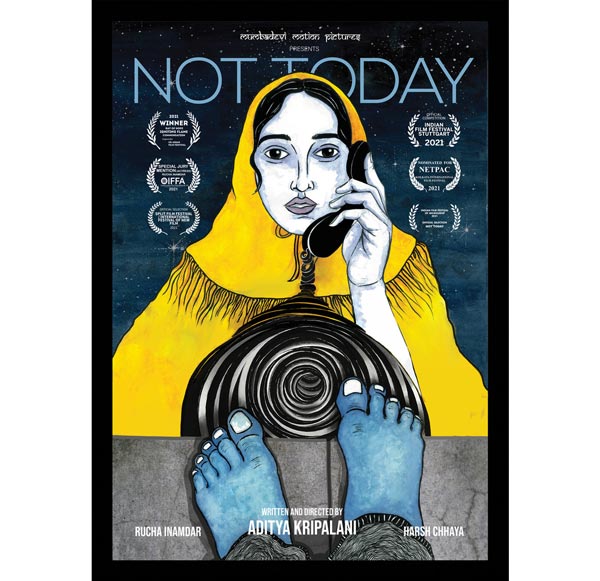 Not today, written and directed by Aditya Kripalani, follows the moving story of a girl’s first day working as a suicide prevention counselor trying to stop a man from jumping off a building. In English and Hindi, with subtitles, the two main characters are fascinating to watch as they only converse on the telephone. Aliah Rupawala, played by Rucha Inamdar, and Ashwin Mathur, played by Harsh Chhaya, discover that they may have more in common than they first thought, and that they can help each other overcome their own feelings. Always unsure if anyone will take the phone call, this movie grips audiences with suspense and our connection to the characters.

The film jumps right in with main character Aliah, played by Rucha Inamdar, a trained suicide prevention counselor, who learns the absurd number of prank calls that need to be blocked from their hotline. It’s not a common starting point for a movie or even included in many other movies, showing right away that this story is unique and worth watching because you’ve probably never seen it. seen before. Aliah talks to her first real caller who needs someone to talk to, and through their conversations they learn a lot about each other, and the audience can also learn a lot about themselves through their conversation. . Inamdar’s performance is heartfelt and real; his character shows the kindness, sometimes naive, of people who want to help others. Chhaya has an equally moving performance as the 52-year-old standing atop a great height threatening to jump. He reveals some of his mistakes he has made in the past and rather than judging him, as an audience, we are led to empathize with him and rethink how those mistakes relate to our own lives.

Kripalani has a very thoughtful use of dialogue, which is especially important for a film where much of the main action involves phone calls. She knew when to cut scenes short or keep them long to get the best drama and most moving performances. Straightforward shots are paired with straightforward dialogue that contains lots of raw emotion from the actors, which is then followed by more mundane but realistic scenes to allow the audience to feel their emotions as well, and then some light humor to help break it up. very dramatic moments. There are quite a few dynamic and interesting shots throughout the movie, like Aliah sitting on a divider in the middle of a busy highway, to add visual engagement to balance the drama of the narrative.

A criticism of the post-production of this film is the strange order of the credits. First, the order is not what most are used to, starting with the cast, followed by production staff, music, special thanks. Then it also goes back and forth between the production crew, special thanks, cast, back to production, special thanks, which I think is unfair to anyone who put in the time and efforts at the film and who weren’t one of the big-name contributors. It’s hard to find their names or people might not give credit to parts of this list in the future.

Globally, Not today is a moving story featuring strong actors and an engaging story that will touch a lot of people. That said, this film centers around the subject of suicide, which may be sensitive or difficult to watch for some audiences for the duration of the film and one should be aware of the subject matter before deciding to watch it.

The New Jersey Film Festival Spring 2022 will take place select Fridays, Saturdays and Sundays until February 20, 2022. Due to COVID, our festival will be virtual again this spring. All films will be available virtually via video on demand for 24 hours on their broadcast date. More information is available here: https://newjerseyfilmfestivalspring2022.eventive.org/welcome