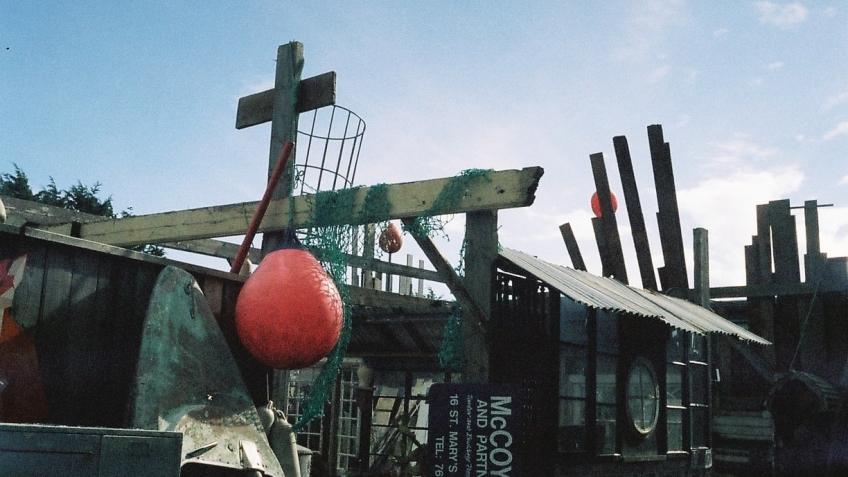 A contemporary Cornish drama. We are looking to raise additional funds for a short film set in a Cornish coastal town.

Set in a world of scavenging yards, house clearances and rural deprivation, Mackling is a social drama following the strange and offbeat relationship between two men, Bud and Sully, as they prepare for a local funeral.

Mackling captures a moment in time, observing two social outcasts and a world separated from normal life. Bud and Sully exist in a very real part of Cornwall. A gritty, harsh and lonely environment, existing on the fringes of society and attracting characters who have nowhere to go. The film’s subtle, observational approach explores the unconventional communities, shifting landscapes and bizarre, magical world hidden beneath the surface of Cornwall.

Jonny is extremely passionate about regional voice in film and driving social change through film. He is currently in pre-production for his next short film ‘Open Country’ which has been funded by Exeter Phoenix’s South West Short Film Commission 2022. His first feature film ‘The Art of Mackling’, written by Callum Mitchell, is in early development with Bosena, Denzil Monk’s production company. His previous projects include ‘Tom’s Dream’, which recently toured Cornwall as part of Hall for Cornwall’s ‘Behind the Postcard’ programme; experimental documentary ‘Small Groups Through Time’; and ‘An Tarow’, commissioned by the Screen Cornwall 2019 FylmK Fund and widely recognized at the BAFTA Cymru Carmarthen Bay Qualifiers, as well as Cornwall, Little Wing and Two Short Nights, including a win for Best Director. Alongside all this work, he is dedicated to advocating for better access to the industry, developing work experience programs and running training courses that open pathways into the Cornish film industry.

Ella has worked as a freelance producer and production manager since graduating with an MA in film and television in 2017, and now works for Penzance-based ecosophic film production company Bosena as a marketing producer. At Bosena, Ella learns all about production from founder and producer, Denzil Monk. Ella has experience with short and feature films, both dramatic and documentary.

Ella produced An Tarow, which is a multi-award winning and nominated short, as well as being shortlisted for the 2020 BBC Arts New Creatives program where she was commissioned to direct Guns In My House, an audio documentary . She recently produced Mab Hudel, a short film directed by Edward Rowe and commissioned by Cornwall Council, Screen Cornwall and the Sound Image Cinema Lab. Last year, Ella coordinated the filming of Behind the Postcard, a government-commissioned short film for the G7 summit. This involved organizing more than 60 shoots in just 8 days. She recently received funding from the Falmouth University Grad Shorts Fund for her experimental documentary A Portrait of Cornwall in the Morning. Ella has worked on feature films as a production manager and production coordinator, including coordinating Enys Men, Mark Jenkin’s forthcoming feature film funded by Film4. She is currently working as Associate Producer on a BBC and BFI funded feature film, shot in Cornwall.

Callum is a writer from West Cornwall. Over the past decade he has created work for the National Trust, openDemocracy, Hall For Cornwall, o-Region etc. This includes intensive writing for the stage, directing films and creating landscape art installations. He is a Nick Darke Talent Award recipient, Associate Artist at Hall For Cornwall and a member of the BBC Writersroom Cornish Voices programme. His first radio work, Solomon Browne, was broadcast on BBC Radio 4 (2021) to widespread acclaim and selected as Drama of the Week.

Callum frequently collaborates with filmmaker Mark Jenkin and served as assistant director on Bronco’s House (2016), Bait (2019) and the upcoming Enys Men (2022). He is represented by Louise Bedford at Lou Coulson Associates.

What we would use the money for:

Entrances to the festival