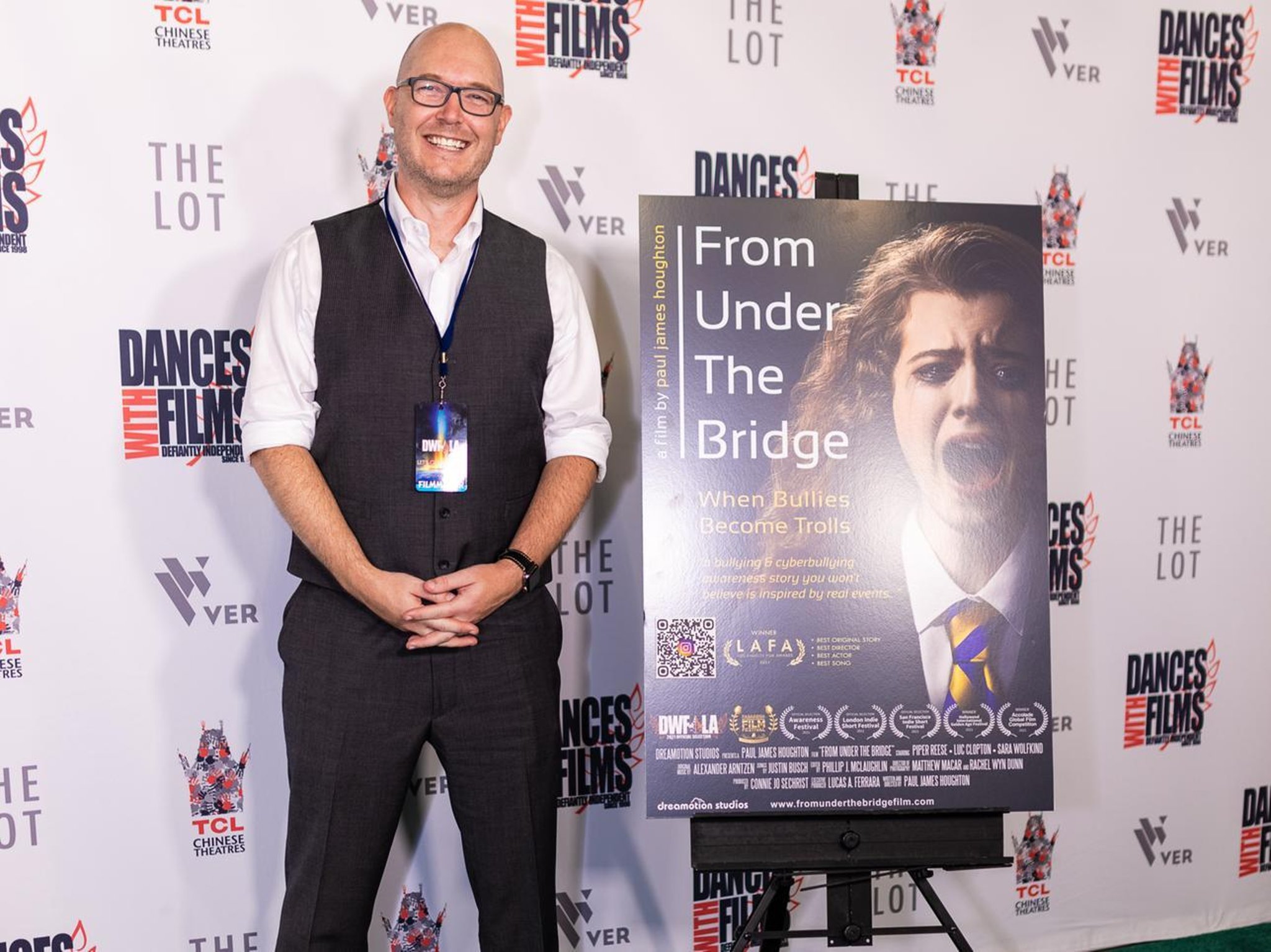 A junior director said his award-winning new cyberbullying film was influenced by his childhood in Luton.

Paul James Houghton, who attended Lealands High School when he lived in Luton, was overwhelmed by the response his film – From Under the Bridge: When Bullies Become Trolls – has received since its long-awaited debut in America.

The director, who moved to America in 1992 and now lives and works in California, grew up in Luton and wanted part of his school life to be included in the film, which is based on the true story of Megan Meier, who committed suicide in 2006, three weeks before her 14th birthday after a serious cyberbullying attack.

Paul at the “Dance With Films” event at the TCL Chinese Theater in Hollywood, California, where “From Under The Bridge: When Bullies Become Trolls” premiered

The 47-year-old began developing the short when his other plans were halted at the start of the coronavirus pandemic and the country went into lockdown.

He said: â€œAs an advocate for eliminating hate around the world and passionate about bullying awareness and bullying prevention in general, I decided to make the film when COVID hit and we ended up with some free time.

â€œWhile filming, I also became close to Megan’s mother, Tina Meier, who founded the anti-bullying and mental health foundationâ€œ MeganMeierFoundation.org â€after the loss of her daughter.

â€œI visited her in St. Louis during post-production, and we became very close. She asked me to collaborate on her autobiography, and I’m working on that with her now. She’s also an inspiration behind the movie.

â€œI wrote the first draft in 2008 after reading Megan Meier’s true story. When COVID hit us all in 2020, I thought about my collection of scripts and decided to make the movie.

â€œWhile there were certainly some hurdles to overcome with the pandemic, it was a fabulous experience.

â€œWe received over 2,000 entries to participate or be a part of the film. And our entire cast is spectacular. Cast members including Piper Reese, Luc Clopton and Sara Wolfkind received awards for their performances in the film. I’m also working with Chris Cimperman on a new project, which plays a key role both in the story and in the associated message.

The poster for the film, which won the award for best poster

“I have to thank Connie Jo Sechrist, the producer and our executive producers, especially Lucas A. Ferrara, a great New York lawyer, who donated a large amount of money to help fund the film.”

The film has already won the award for “Best Short Film” at the Dances with Films festival in Los Angeles, where its short film made its world premiere.

Paul submitted the film to Luton’s Bute Street Festival and several other UK festivals including Leeds, Manchester and Raindance.

He said: â€œThe film really stands out and the message is incredibly relevant, powerful and necessary. We just started filming and winning the Best Picture award at the screening was great.

â€œNever forgetting my roots, I worked with our costume designer, Lorraine Ely, who also lives here in California, and who also lived on my street in Luton.

“Pure coincidence, but fabulous. It definitely helped ensure that the vision reflected our British roots in high school.

â€œThe attire of the students in the film, including the colors and design of the tie, is directly inspired by my high school – Lealands High School.

“I graduated there in 1990, before going to Luton Sixth Form College.”

Paul plans to direct more films, after making his directorial debut with From Under the Bridge: When Bullies Become Trolls

He added: “The response has been incredible. It moves everyone who sees it and we receive outstanding awards, festival selections and commentary.

â€œBullying and cyberbullying continue to increase, while seriously affecting, damaging and destroying lives.

â€œHarassment has become possible from anywhere in the world, with much more anonymity than ever before, as the lack of accountability and responsibility skyrockets. We all need to recognize this massive problem and â€œbe the changeâ€.

â€œWe have the Awareness Film Festival at the end of October, which deals with a range of global social issues, including mental health, youth and violence.

â€œIt’s really important to me because that’s what it’s all about, raising awareness about mental health and the issues that come with bullying.

â€œIt’s important to remember that this movie is based on a true story, the story of Megan.

â€œHer mother, Tina, is now a friend of mine, and she supported the film, and we support her foundation.

“Harassment – in all its forms – and the impact it has on people, is a very important issue and I hope this film sheds light on it.”

UPDATE The Motion Picture Academy Museum is finally opening to the press, and the wait was well worth it!