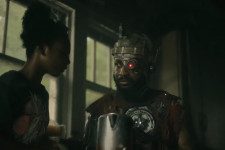 Last October, Dreamville’s own Lute launched his latest project Mouf d’or. The offering housed 13 tracks and features guest appearances from names including JID, Cozz, and Ari Lennox, in addition to Saba, Westside Boogie, BJ The Chicago Kid, and more. Last April, he released the official deluxe upgrade which added six new tracks, including “Like Wine” which was featured on DJ Drama’s D-Day: a Gangsta Grillz mixtape.

Yesterday (November 1), Charlotte’s emcee returned to share the latest offering from his album, the official visual for “Finding Self.” Directed by Juan Felipe Zuleta, the new music video is a short that takes fans on a journey of exploration. On the song, Lute delivers powerful lyrics about discovery:

In a recent interview, the “Ambitions” rapper reflected on how his latest project has helped him through some tough times lately. “Creating luxury gave me something to look forward to,” he said. “It put me in a place where you know, I can appreciate. I can feel like I’m working and doing something ’cause again, I’m the kind of nigga that’s working on my traumas.

Be sure to hit play on Lute’s brand new short for his song “Finding Self” below.

Getting ‘stuck’ with payday loans