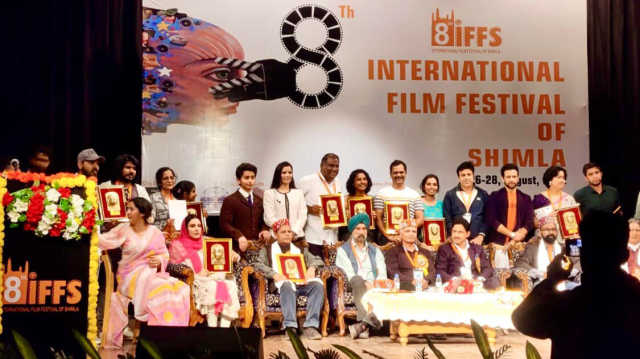 Among the prizes at the national level, the best documentary was awarded to The First Ink – Memories That Make History by Shridhar KS and Ripples Under the Skin by Farha Khatun. The Special Jury’s Documentary Prize went to Divya Hemant Kharnare’s 15 Seconds A Lifetime, while Faraz Arif Ansari’s Sheer Qorma won Best Short Film.

The Special Jury Prize for Short Film went to Kakitham – Paper by Vinoth Veeramani, Pinky And Papa by Shivang Khanna and Kumu by Akanshya Bhagabati. The best feature film in this category was Chabiwala – The Keysmith by Raja Ghosh.

In the Himachal State Awards, Aaryan Harnot’s Keel was voted the winner for Best Film.

The festival took place from August 26 to 28 at the Gaiety Theater in Shimla. The closing ceremony was presided over by the former director general of the film division, VS Kundu, where films were awarded in various categories at international, national and state level.

In addition to screenings, an open forum was held during the festival where filmmakers shared their experiences and interacted with the audience. An exhibit from the National Film Archive of India, Pune, was shown at the exhibition hall of the Gaiety Theatre. The exhibition presented works of art and literature from the archives. Screenings were also organized for inmates at Kanda Central Prison and Nahan Prison.

The festival was organized by Himalayan Velocity, in collaboration with the Department of Language, Art and Culture (LAC) and the Department of Tourism and Civil Aviation of the Government of Himachal Pradesh.