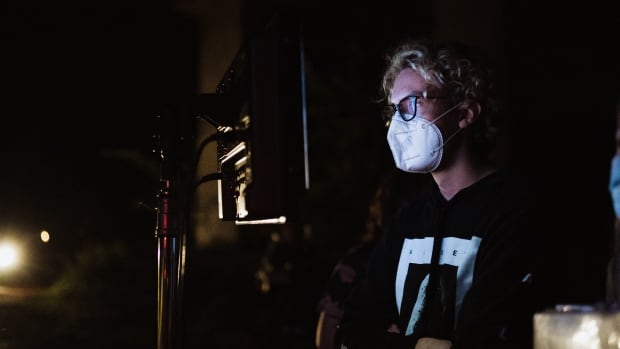 Fredericton filmmaker Ty Giffin has always had a fascination with gangster films and since watching the film Freedmenhe wanted to make one of his own.

He wondered why he was so drawn to these types of films in his youth and ultimately attributed it to “toxic masculinity”.

At that time, the short film he was writing, Ciceronehas become a look at the men young boys look up to and the culture of violence that surrounds it.

“It was a bit, not exactly autobiographical, but I definitely put myself in the protagonists shoes when I was writing it,” Giffin said.

Toxic masculinity refers to cultural pressures that encourage men to behave in a certain way, often linked to the notion “boys don’t cry”.

The 11-minute film follows a young man named Robbie as he tries to figure out what to do with his life, Giffin said. Robbie gets bullied at school and sees a mob member named Jon. He admires Jon, so he decides to follow him for a screenplay he’s writing.

Jon Wilkinson plays Jon in the film and he said it was fun to explore an opposite personality to his own.

“At the end of the day, every human being has the ability to do bad things, but not everyone chooses it,” Wilkinson said. “So to kind of have this safe space…through film to explore this side of human nature is very, very interesting.”

Wilkinson said he was a big fan of the crime drama TV series The Sopranos and he always saw two of the main characters, Tony and Paulie, as being really cool. But since I work on Ciceronehe looked at the series from a different point of view.

When people watch the movie, Wilkinson hopes viewers will start to re-evaluate the people they look up to, whether they’re fictional or real.

“I hope after seeing this movie people…say, ‘OK, cool, but he’s not a great person either, you know, what exactly are they doing for the society ?'”

Giffin said that the main character, Robbie, feels beaten down by society and is in a vulnerable place where he is on the verge of possibly becoming an abusive young man. Robbie has an uncle in the movie who tries to steer him in the right direction, but Robbie ends up looking up to Jon.

Giffin said this part of the plot inspired the film’s title, Ciceronebecause that’s an old term for a guide.

“I kind of imagined it as the male role models we look up to and the effects they have on us and the culture that came before us, and how we fit into it,” Giffin said.

How the movie was born

Giffin studied film at the University of New Brunswick and has only produced short films for less than $100 each. But Cicerone was a $13,000 project.

When Giffin graduated, people told him to “write what you know”.

He wrote a screenplay with tropes and imagery from gangster movies, but when he worked with a producer and started digging deeper, he realized the real story behind it. Cicerone.

Giffin received an ArtsNB Creation Grant and a Short Film Enterprise Award after completing the screenplay in 2019.

Then, when the pandemic hit, filming was postponed to September 2021. Giffin did all of the film’s editing himself and said he only tries to work on it when he feels inspired.

The film premiered at select online festivals, but will have its in-person premiere at the FIN Atlantic International Film Festival in Halifax on September 18.

Giffin hosted a private screening for the cast and crew when the film was completed and he said he finally saw the short with “fresh eyes.”

“After all these years and the delays and everything, it was pretty beautiful,” he said. “I was quite emotional and smothered coming to the end of the movie for the first time. So hopefully when people watch it, they feel the same way.”

Giffin said breaking into the world of film as an Atlantic Canadian filmmaker has been interesting. He said many of his connections came from college, which gave him the opportunity to work on professional sets.

Now he works at UNB in ​​the media services department and he says his journey has “come full circle”.

“We feel every year that the [film] community in Fredericton and New Brunswick is getting bigger and bigger.

Get a cash advance with bad credit

Phony Texts adapts a viral story into a short film