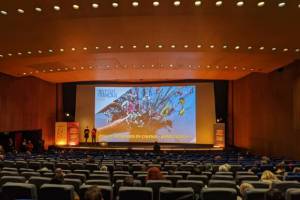 TBILISSI: Otar’s death by Georgian director Soso Bliadze received the award for best feature film at the 22nd edition of the Tbilisi International Film Festival. The festival took place from December 5 to 12, 2021.

The winners of the Documentary Competition were Glory to the queen directed by Tatia Skhirtladze and Tame the garden by Salome Jashi, while the winner of the Courts + Animation Competition was Load directed by Miranda Namicheishvili.

Cinexpress movie reviews A special prize was awarded to What do we see when we look at the sky? directed by Alexandre Koberidze.

Click HERE for the podcast with program coordinator Guram Ghonghadze.

Special mention:
debutant actress Marine Kubaneishvili for Why are we together (Georgia)
Directed by Ilo Ghlonti, Levan Ghlonti
Produced by Studio Phonogram

Cinexpress movie reviews Special price:
What do we see when we look at the sky? (Georgia, Germany)
Directed by Alexandre Koberidze
Produced by DFFB