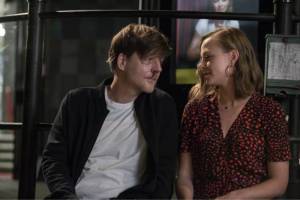 FNE at the Hungarian Film Festival 2021: perfect as you are

BUDAPEST: The romantic comedy Perfect as you are / Így vagy tökélétes by Péter Varsics opened the Hungarian Film Festival 2021. Varsics won the festival’s Best First Feature Award for the film.

The film, set in contemporary Budapest, deals with lies in relationships and artistic creation. After the two protagonists, an exhausted advertising expert and esoteric bestselling author, accidentally meet and express their mutual dislike, they become entangled in a web of deception, and a strange and entertaining romantic affair emerges.

“The audience started laughing at what we thought was funny and also what we didn’t think was funny. They hooked up to the movie and responded enthusiastically,” Varsics told FNE.

“For this type of film, the cast is the most important thing. If we don’t have the right actors, or if they can’t cooperate, the feature fails. One of the main considerations in their selection was that I don’t want typical protagonists already seen in countless romantic comedies, but two real people who cheat and cheat on others, ”Varsics told FNE.

The author of the screenplay is Csaba Csurgó, who previously wrote the hit romantic comedy What happened to Timi / Megdönteni Hajnal Tímeát.

“I saw the potential to create a more exciting movie in this genre by using romantic topos in a way that allows the film to stay honest, and even flip the topos a bit,” Varsics said of the script. .

Perfect as you are / Így vagy tökélétes was filmed in August and September 2019 on location in Budapest. It was produced by Tamás Lajos and Ábel Köves via Szupermodern Studio. The director of photography is András Nagy. The National Film Institute – Hungary supported production with 984,221 EU / 350 million HUF. This is the first feature film from Varsics, who works as Creative Director at HBO Europe.

The film is distributed by Intercom in Hungary. It will open in local cinemas on August 19.

Souvenir of Rivoli, cinema palace in the city center