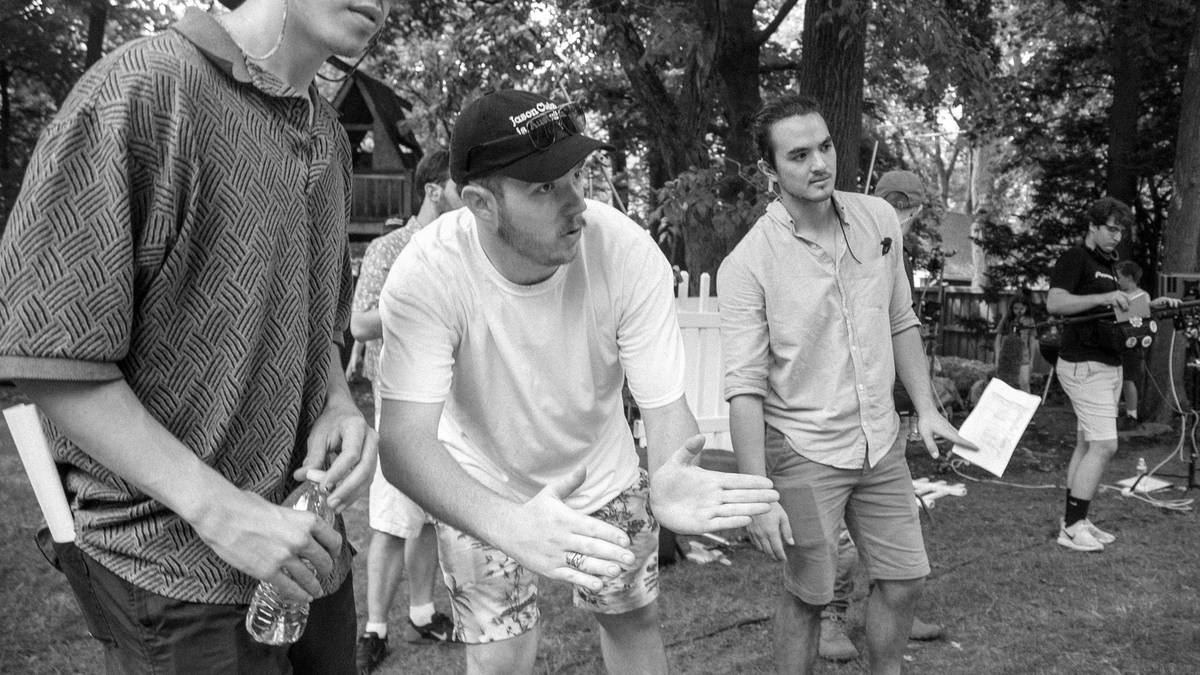 Aspiring director Mason Cade Packer returns to Kāpiti from his Los Angeles base to create a short film as an ode to his childhood, his old school and the people of Kāpiti.

Prince is a 30-minute thriller about a high school principal dealing with the aftermath of a student found dead on college grounds.

Principal Rory “Prince” Kane takes matters into his own hands when he begins to suspect the involvement of the father of one of his students with special needs.

Mason said that while “any similarities to real people are purely coincidental”, the character is “an ode to my favorite principal, Tony Kane”.

“Beyond the family name and their shared devotion to their students, Prince is a completely original character.”

Prince was born during Mason’s 12-minute walks to school when the dream of becoming a filmmaker was beginning to take shape.

“The film is inspired by those dreary, damp July mornings and my love for patient directors and tense thrillers.

“It feels like the culmination of all the swirling thoughts I had conjured up on those old rainy walks to college.

“Every day, I felt like I had a crazy new idea running through my head.”

By definition, the film is a thriller.

“It’s a little scary, hopefully intriguing and part crime drama, but at its core this film is the story of a kind-hearted director stricken by horrific circumstances, who will take unfathomable measures to protect His students.”

Completing NCEA a year early so he could go to New Zealand Broadcasting School in Christchurch to study film and television production before moving to Auckland to pursue various filming opportunities, it was here that Mason met and worked for the first time with his producing partner, Micah Winiata.

The two then moved to the United States to study at Columbia College in Chicago.

Separated by Covid-19 since the pandemic with Micha returning to New Zealand while Mason remained in Los Angeles, the two come together to create Prince.

“This film doesn’t exist outside the Kāpiti coast, I wouldn’t shoot it anywhere else.

“For me, it’s about bringing together local filmmakers, producers, actors, and composers of our time in the community and bringing some cinematic magic back to Kāpiti.”

With support from the New Zealand Film Commission, Mason was mentored during the development of this and various other feature film projects by former Kāpiti College student and New Zealand director James Ashcroft, who is currently working on a thriller. $60 million Hollywood.

“The people and the passion behind this film are almost all Kāpiti natives.

“We’ve all gone and learned our stuff, now it’s time to prove it was worth it to those who supported us as we left the nest.

“It’s amazing to see it all come together in this way.”

Prince is the last short Mason wants to shoot before moving on to feature films.

“It’s the ‘here’s what I can do, world’ piece that I hope can skyrocket me into big festival awards and help get my first big movie off the ground.”

Mason asks the Kāpiti community to help fund the $85,000 film.

“We will approach almost any business in Kāpiti for help, and we are open to help from individuals as well.

“If we can rally the community bit by bit, business by business, we believe we can achieve our fundraising goal together.”

Asking companies to pledge up to $500 to $1,000 will earn them screen credit in the film and tickets to screening events, while larger sponsors above the $1,000 threshold $ will receive additional recognition and rewards.

The problem, Mason said, is that no one will be asked to hand over until the total pledge amount has reached the full funding goal.

“Supporting this project is bringing paid film work back into the community for the cast, extras, producers, crew and many more.”

Filming will take place over eight days, with Kāpiti College donating its school grounds, time and students to the project for free.

“This is a major support given the dozens of extras, the eight days of filming and the access we will need in college.

“Christian Cullen also pledged the first $1,000 himself, while Tommy’s Kāpiti backs him up with an additional $1,000.”

When the film is finished, the priority is to screen it in Kāpiti before sharing it with the world.

“We want the world to see our little town so that it can be sent around the world to quite prestigious international film festivals (if they accept us), and we hope to score big points in one of them. them.”

If all goes well on the festival circuit, it will be available to watch online or through home streaming platforms.

“We hope Prince can perform to massive theatre-loving audiences around the world at film festivals and streaming platforms upon release, and be a global showcase for the talent of the many young filmmakers hailing from Kāpiti.”