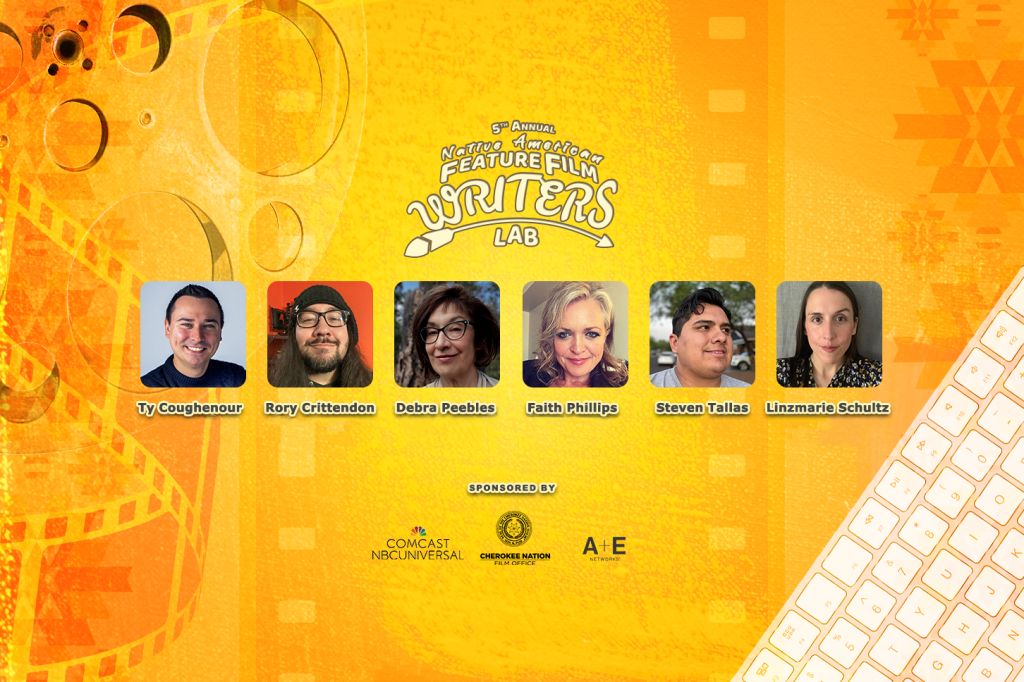 In partnership with Comcast NBCUniversal, A+E Networks, Cherokee Nation Film Office and A+E Networks, the Native American Feature Film Writers Lab is an annual program for talented and aspiring screenwriters. Over the course of 10 weeks, chosen fellows develop a new script, meet with industry partner organizations, and receive creative advice on their scripts from literary professionals.

“The incredible success stories of our many colleagues in this lab are a true testament to the genuine work behind our programs,” said Ian Skorodin, Chief Strategy Officer for the Native American Media Alliance. “It’s incredibly inspiring to see our colleagues working, writing, and delivering the authentic voice of Native America across all of the major studios, networks, and media conglomerates.”

The Native American Feature Film Writers Lab received many applicants from several tribes in North America. Selected fellows will participate in a ten-week program hosted by seasoned writers. The lab will consist of daily workshops, seminars and intensive mentoring to help each writer develop and complete a screenplay in ten weeks and hone their skills to prepare participants for studio writing opportunities. By the end of the program, each participant will have completed an original screenplay and will participate in our annual Writers Pitch Festival each November during LA Skins Fest.

The 6 Fellows of the 5th Annual Native American Feature Film Writers Lab are:

Ty Coughenour (Lummi Nation)
Ty Coughenour is an award-winning writer, producer and director who resides in Seattle, Washington and is a member of the Lummi Tribe. He graduated from UCLA in 2011 as a Gates Millennium Scholar. While at UCLA, he interned at Simon Kinberg’s Genre Films and a writer’s room at Nash Entertainment under Robert Kosberg. He moved to Seattle in 2013 and started working as a producer at Mighty Media Studios. While working as a producer, Ty received a Telly Award for his work on the 2014 Summer X Games, a Regional Emmy in 2015 for creating an NFL talk show, oversaw the integration of Skype at the 2016 presidential conventions and produced the Xbox broadcast of The Batman. against Superman premiere in New York. J

y continues to work as a senior producer, writer and director on Tier 1 global digital events. While working full-time, Ty continued to focus on screenwriting and was selected for the Sundance NativeLab Fellowship in 2013. With the grant from Sundance, Ty wrote, produced and directed his short film, “Five Dollars”, which was accepted at several film festivals. including the San Diego and Phoenix International Film Festivals. He then focused on writing, producing and directing his first feature film.

Rory Crittendon (Cherokee Nation)
Rory Crittenden is a writer, director and producer from the Peavine community of the Cherokee Nation. Rory has won six Heartland Region Emmys for his contributions to his Osiyo tribe’s documentary television program, Voices of the Cherokee People. He’s a Cherokee history nerd and pro-wrasslin’ enthusiast. He makes a living as a freelance filmmaker, creating content for various Native American governments, television programs, and community organizations. Rory lives in Tulsa with his wife Christy and their two children.

Debra Peebles (Red Lake Band of Chippewa)
Debra Peebles grew up in North Dakota and northern Minnesota. Aboriginal heritage and her mother’s artistic training changed her life and influenced her path to writing for film. Debra received a scholarship to attend the Skowhegan School of Painting and Sculpture, and eventually an MFA from the University of Missouri in Fine Arts and Communications. She spent six years as a radio producer and DJ in Kansas City. Inspired by classic films, Debra was drawn to telling stories about relationships, their worlds and the courage to change them.

Faith Phillips (Cherokee Nation)
Faith Phillips is a Cherokee novelist and screenwriter living in the foothills of the Ozarks. She created the subgenre known as Okie Noir. His writing conveys a unique perspective on the lives of people living in a country populated by migrants, exiles, outlaws and survivors of attempted genocide. Phillips left the active practice of law and returned to her native country in 2011 to devote her life’s work to writing. Over the next decade she published four books, including fictional novels, memoirs and true crimes, as well as a host of rock & roll essays and reviews.

His storylines are designed to deliver the particular experience of the joyful yet painful existence of life in the Cherokee Nation with a healthy dose of humor. Phillips recently produced a national series of true-crime documentaries set in his beloved home. Faith’s career is dedicated to telling the true and powerful stories of people who have traditionally been ignored and unknown, emphasizing the powerful message of healing that comes from truth.

Linzmarie Schultz (Wyandot Nation of Anderdon)
Linzmarie Schultz grew up in rural North Carolina where she attended the NC School of the Arts for both acting and a film summer specializing in writing/producing. She (eventually) graduated from UNC CH, where she acted and wrote on the student soap opera, as well as a guest writer on an action comedy series. Between the beginning and the end of her studies, she went to drama school in England. She recently placed second in Film Impact Georgia for her short screenplay, a dystopian dance film.

Her novel won the Judge’s Favorite Award for Novel in Progress from Ink and Insights. His recent pilot was inspired by his grandparents and their families (both together) Detroit experiences and stories. She considers herself a genre writer. During the pandemic, she tried her hand at stand-up and co-produced a zoom scene study of scripts from working writers she met on Twitter, including a BAFTA winner. She is based in Atlanta and is a member of SAG-AF-TRA. She is very excited and grateful for this feature lab!

Steven Tallas (Navajo)
Steven Tallas is an award-winning filmmaker known for his feature debut, 2020’s Rez Dogs. Growing up, Steven wanted nothing more than to see someone like him star in the movies he loved the most. With his penchant for storytelling and his love of cinema, it’s no surprise that he found his calling in film. He began creating films as a teenager, learning from online resources and his experiences as an extra on film sets across Arizona and New Mexico. Coupled with his passion for sharing his heritage, Steven uses film to create opportunities for fair representation of the Navajo Nation in art and media.

Its goal is to share the stories and history of Native Americans that Hollywood has often overlooked. Steven also hopes to create films with messages and characters that younger generations can relate to, films that he hopes will make his youth proud. Steven was honored to be part of the Native America Media Alliance Writers Seminar, which helped him hone his screenwriting skills. He also participated as a key presenter at the Native Film Summit and was also a judge at the Santa Fe Film Festival and the Alter Native Film Festival. He has worked with HBO and PBS. He is currently finishing a found horror movie called Skinwalker Cave.