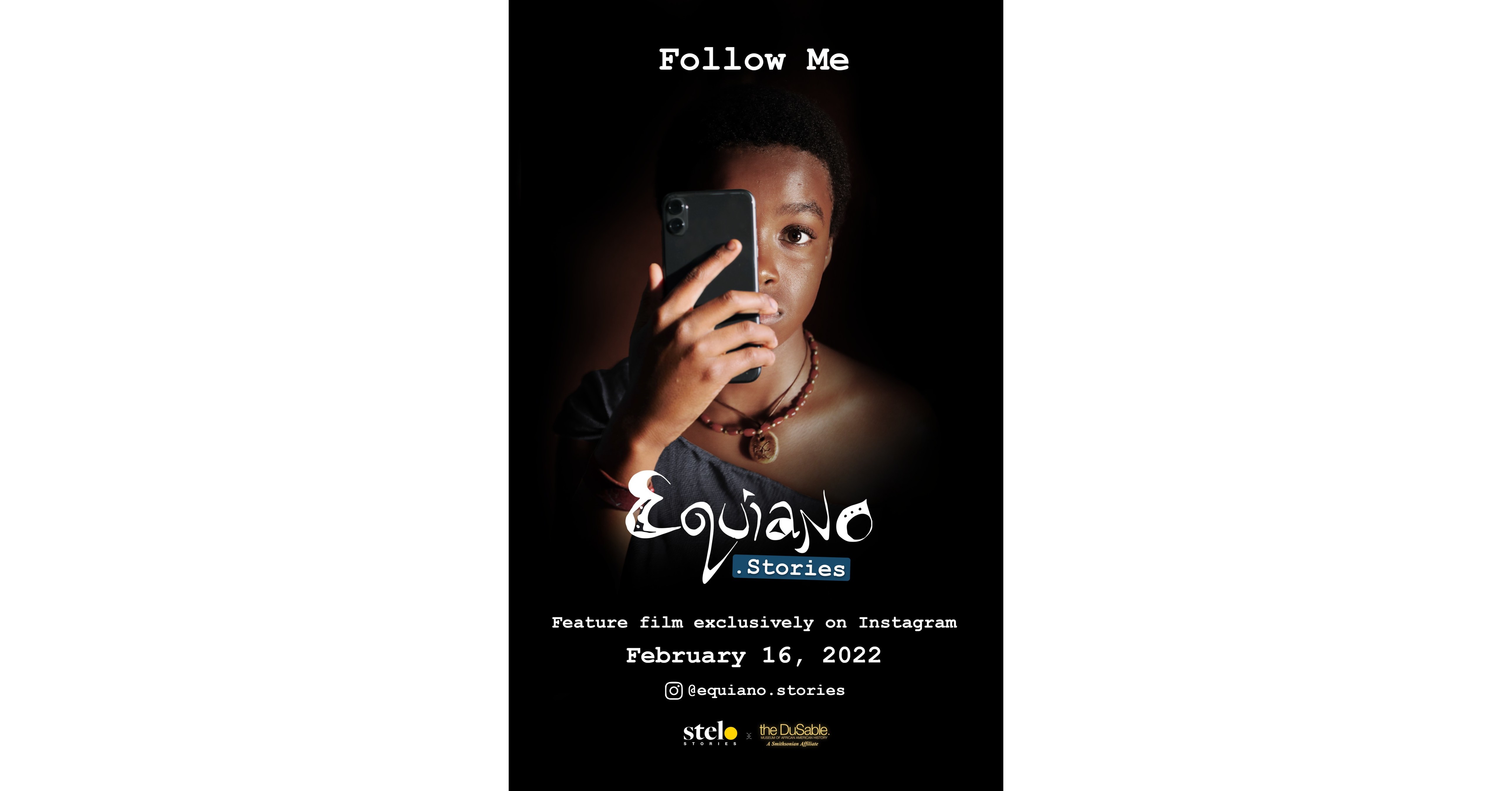 “Equiano.Stories” follows Stelo’s groundbreaking release of “Eva.Stories,” the diary of a teenage Holocaust victim told on Instagram that captured 300 million views within 48 hours of its release. “Equiano.Stories” is the second film in a series by Stelo that takes the stories of young people who have documented their lives at extreme moments in history and connects them to their 21st peers of the century through social media.

Subscribers to @Equiano.Stories will meet 11-year-old Equiano and watch his story unfold as he posts approximately 400 individual stories, totaling 80 minutes of content, in the first 48 hours of the film’s release. Much like today’s Instagram influencers, Equiano will share moments from his day – from a carefree boy in his village with his loving family and rich culture, to the fear and confusion of being kidnapped, to the harrowing experience of life aboard a slave ship.

“Equiano.Stories” focuses on Equiano’s childhood story to connect him with today’s youth. He became an influential figure in history – after buying his freedom at around 20, Equiano moved to London and later published his best-selling memoir in 1789. First-hand account was essential in stopping the slave trade in Englandthe world’s largest exporter of enslaved Africans at the time, and remains one of the only first-hand accounts of life in Africa written by an African author.

“Stelo Stories shares historic stories with our audience by meeting them where they already are – on their phones and on social media,” said the director of Stelo Stories and one of the film’s creators, Yvonne Chioma Mbanefo. “We created ‘Equiano.Stories’ to connect people with a new narrative of black history. The story begins with a dynamic young man who is not so different from the youth of today – he likes to dance, run around his neighborhood and hang out with his friends. For far too long, historical films have begun telling the story of black history through slavery. ‘Equiano.Stories’ paints a vivid portrait of a story that starts with freedom.

Stelo Stories has partnered with the DuSable Museum of African American History, an affiliate of the Smithsonian Institution, to bring Equiano’s story to life. DuSable also contributed to the film’s deeper educational content and created a museum exhibit that takes visitors to the village of Equiano to learn about the culture of West Africafeaturing pieces from its own permanent collection of Africa never before seen by the public.

“Our collaboration with Stelo Stories on ‘Equiano.Stories’ is important because it gives us a platform to remind the world that slavery is not our origin story as black people,” said Perri Irmer, President and CEO of the DuSable Museum of African American History. “Equiano’s story speaks very eloquently and in a way that we believe will create a paradigm shift in how our story is presented, consumed and understood. This is exactly what the world has need right now: the truth, the whole truth, historically accurate and beautifully portrayed.”

Inspired by today’s viral dance videos, the film launches with a mobile experience that invites people to learn the steps of the beautiful Nigerian dances seen in the film. The new hands-on experience, available on the Stelo Stories Dance app, is the first AI-based mixed reality dance tutorial to accompany a movie launch. The app’s virtual teacher, AI Dance Coach, uses state-of-the-art cellphone camera technology and artificial intelligence to teach steps to viewers. AI Dance Coach corrects dancers in real time based on their actual performance, showing them what they got wrong and how to correct their moves. Look for the Stelo Stories Dance app in the Apple App Store at February 16.

Little lessons will also be launched on Instagram with each of the highlights of the film. These short visual sequences reveal what viewers see in the film, both historically and culturally. The lessons were hosted by scholars from the DuSable Museum, Howard University, Georgia State, and Stelo Stories.

“Equiano.Stories” is based on the bestselling memoir by Olaudah Equiano which is one of the only first-hand accounts of life in West Africa written by an African author. The film reimagines the first part of the book in a modernized format: Olaudah Equiano is an 11-year-old boy living in a bustling Igbo village of West Africa in 1756. Deeply connected to his family and his community, he documents his life in the village through stories shared with his followers. But one day, Equiano and his sister are kidnapped from their home. They are separated, and Equiano is transported alone, on foot, towards africa West coast where he is made to embark on a slave ship…

Stelo Stories is an award-winning film studio that creates vertical, scripted, high production value content meant to be viewed on mobile, because that’s where the audience is. Its first series tells the true stories of 10 incredible young people who have documented their lives at extreme moments in history.

“These young people had a pen and paper to tell their stories. We are giving them a phone, social media and other technologies to allow them to communicate directly with their 21st peers of the century,” says Maya Kochavico-founder of Stelo and one of the film’s creators.

“Our films are shot as if the protagonist is holding the phone and filming their daily life,” says Stelo co-founder and one of the film’s creators, Adi Kochavi. “In our new autobiographical genre, the protagonist is aware of the viewers and invites them into their lives, which creates a personal relationship between character and viewer.”

The Stelo team is made up of award-winning writers, artists, and philosophers, as well as experts in AI, computer vision, and Metaverse technology. Stelo aims to tell important and meaningful stories to its audiences by meeting them where they already are: on their phones and the latest technology. Stelo was co-founded in 2020 by sisters Maya Kochavi and Adi Kochavi. To learn more, visit stelostories.com.

The making of “Equiano.Stories”

“Equiano.Stories” is a multi-million dollar production shot in Cape Town, South Africa, in 2019 with over 400 cast and crew members. The set includes two main locations: a village built for the film and a reconstructed replica of a ship. The village and ship are handmade replicas based on academic research and Equiano’s own account. Equiano’s story unfolds to music created by Kahil El‘Zabar and Stephane Legar.

The DuSable Museum will open the Equiano exhibition

The DuSable Museum of African American History, affiliated with the Smithsonian Institution, is the nation’s premier independent museum dedicated to the collection, preservation, and study of the history and culture of African and American d of African descent. To celebrate the story of African origin in “Equiano.Stories”, the Chicago-based at the Museum will open an exhibition on February 16 which revives the life and customs of the village of Equiano. Visitors to the museum will enter a handcrafted replica of the thatched-roof huts seen in the film to be immersed in African artworks, sculptures and photographs. These historic pieces from DuSable’s permanent collection are interwoven with interactive digital experiences, including vertical screens showing scenes from the film and social lessons shared in the Instagram experience. To learn more, visit www.dusablemuseum.org and follow @dusablemuseum.

Why lines of credit are better than payday loans